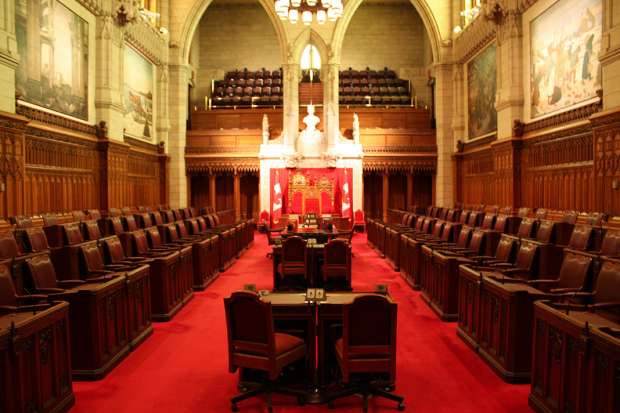 Canada’s Senate has been rocked by the expense scandal. SOURCE: Wikimedia.

Both the Senate and the House of Commons continued to debate the proposed suspension of Senators Pamela Wallin, Patrick Brazeau and Mike Duffy on Tuesday.

Last week, Duffy told the Senate that the Prime Minister’s Office and the prime minister personally asked him to resign. In yesterday’s Senate meeting, Duffy also said a cheque was given to him by the prime minister’s former chief of staff Nigel Wright to cover $13,500 in legal expenses. He further alleged the PMO instructed him to lie about the source of the money.

Prime Minister Stephen Harper repeated throughout today’s question period that it was not unusual for the party to provide legal costs for its members.  However, he repeatedly emphasized Wright’s role in the Senate scandal.

Duffy, Wallin and Brazeau underwent an audit in 2012 regarding housing allowances they may not have been eligible for. Duffy claimed $90,000 in Senate housing expenses, which he paid back, using a cheque issued by Nigel Wright. At the time, the PMO confirmed that Wright wrote a cheque to Duffy, but said he acted alone, without the knowledge of anybody else. Wright resigned his position as chief of staff at the time.

However, on Monday afternoon, Prime Minister Stephen Harper told a Halifax radio station that Wright did not resign, but was dismissed.

Bruce Campion-Smith, Ottawa bureau chief at the Toronto Star, told Humber News the Conservative Party “pushed hard about a week and a half ago to have the three senators, including Duffy, suspended for two years and stripped of their pay and benefits.”  Nelson Wiseman, a professor of political science at the University of Toronto told Humber News that the proposed suspension has been problematic. “Conservatives feel that due process isn’t being followed. Not only have the Senators not been convicted of anything, they haven’t even been charged,” Wiseman said.

The Senate has to be accountable for its actions. Due process is a right of every Canadian, be they senators or… http://t.co/VhTxfvwJHm — Kiara Galbreath (@KiaraGalbreath) October 27, 2013

The PMO’s push for suspension, has also drawn more attention to the Senate. “In doing what they did they astonishingly created some public sympathy for the three senators who Canadians might be rightly upset about their alleged spending infractions,” Campion-Smith said.  “The longer it drags out in the spot light the more damaging it is. [The Conservative Party] originally wanted these three senators suspended out of view as quickly as possible. It’s been this long drawn out execution instead.”

Despite the increased public attention however, some politicians feel the public is not aware of the scope of the problems in the Senate. Craig Scott, the New Democratic MP for Toronto-Danforth told Humber News, “Wallin and Duffy are symbols, and almost microcosms, of the problems that the overly partisan senate produces. You shouldn’t be surprised. It just so happens that they are poster children for a very abusive approach to partisan politics. They’re not alone. This is closer to the norm than the average Canadian realizes.”

They’re taking about closure at the Senate today – basically speeding up the vote on those suspension motions for Duffy, Brazeau & Wallin — Mercedes Stephenson (@CTVMercedes) October 29, 2013

Even with the adoption of the closure motion(s), Nolin predicts the debates could go into next week. Still, he thinks it’s in order. #SenCa