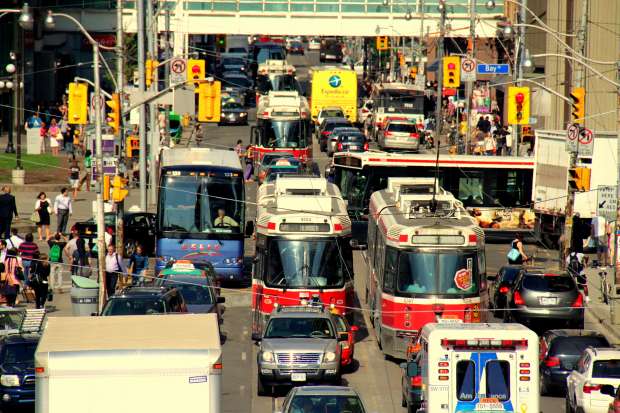 City Manager Joe Penachetti presented the report Mayor Rob Ford asked him to produce outlining ways to come up with the funding for a Scarborough subway.

The manager’s report suggests there should be a residential property tax increase of 1.6 per cent over three years.

This three-year impact on the average household in the city would be $41 over three years, and could get as expensive as $1,200 over 30 years, according to reporter Tess Kalinowski of the Toronto Star.

The city passed a motion in July saying that, if the provincial government offered up the $1.8-billion needed, the subway expansion in Scarborough would move forward.

The breakdown below shows the estimated costs of a subway versus an LRT to replace the aging Scarborough RT line. The top number in the left-hand column is three billion.

Chart showing cost difference for a subway vs LRT in Scarborough.
Cost per rider: Subway – $85, LRT – $48

TTC CEO Andy Byford took questions from councillors and addressed the question of a transit line to help congestion downtown, saying he is sticking with his beliefs about the line.

“I believe the relief line is a priority,” Byford said at the meeting. He said that both lines can happen without one compromising the other.

“The province has committed to constructing and paying for the relief line,” he said.

He also said that no matter the outcome, the TTC is committed to providing the city with a better transit network.

“My view very clearly is we should build the best transit network with the funds available,” Byford said.

As for longevity, Byford said that a subway is preferable.

Byford added that while, in the short term, a subway can carry more people, an LRT can be modified to carry as many in a longer term.

City planner Jennifer Keesmaat said there are 24 other priority projects that are on hold for the Scarborough transit resolution.

She said it’s not clear how much money will be left for the other projects.

André Côté, a professor at the Institute on Municipal Finance and Governance at the University of Toronto, told Humber News he thinks there are problems in this process.

Côté said the discussion about subways in Toronto should come back to the municipal level.

“We have a regional transportation planning agency and yet, most of the players in the discussion about [transit in] Scarborough have been the politicians at all three levels of government, basically,” he said. “That should suggest to us that we’re on the wrong track to be doing these things.”

The discussion today revolves around finding a replacement for the aging Scarborough RT.