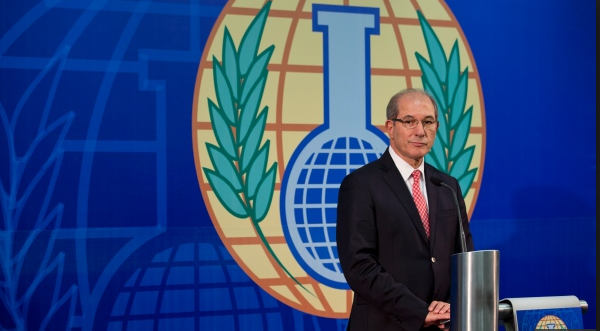 The Nobel Peace Prize has been awarded to a group working to prevent the use of chemical weapons.

It was announced Friday that the Organization for the Prohibition of Chemical Weapons had been given the honour.

The Norwegian Nobel Committee said in a statement the OPCW was awarded the prize “for its extensive effort to eliminate chemical weapons.”

Due to the recent crisis in Syria, an emphasis has been put on the destruction of such dangerous weapons, they added.

In a statement released by the OPCW, the organization’s Director-General Ahmet Uzumcu thanked the Nobel Prize Committee, and commended the team at OPCW.

“Working to realize the vision of a world free of chemical weapons, we rely on the expertise, professionalism and dedication of our staff,” he said.

The OPCW team leader on the Syria mission is Canadian Scott Cairns. In a video released by the organization he talked about the team’s experience dealing with chemical weapons in Syria.

“We were really the only ones that could go in there with that chain of custody and with that integrity and retrieve true facts that could stand up to scrutiny in larger arenas,” Cairns said.

The group ran the risk of coming under fire in Syria as a UN convoy. He added they were subject to scrutiny via social media.

An extended cease-fire was implemented to ensure the OPCW could carry out the job safely.

“The team was under immense pressure, and when a team is under pressure it will either crack or it will become a closer, better functioning team,” Cairns said. “It became very clear that our team was not going to crack.”

In his statement, Uzumcu spoke about the recent use of chemical weapons in Syria.

“Events in Syria have been a tragic reminder that there remains much work yet to be done,” he said. “Our hearts go out to the Syrian people who were recently victims of the horror of chemical weapons.”

He added the organization’s work continues on the ground in Syria as they work to ensure this horrible tragedy is never repeated.

“The recognition that the Peace Prize brings will spur us to untiring effort, even stronger commitment and greater dedication,” he said.