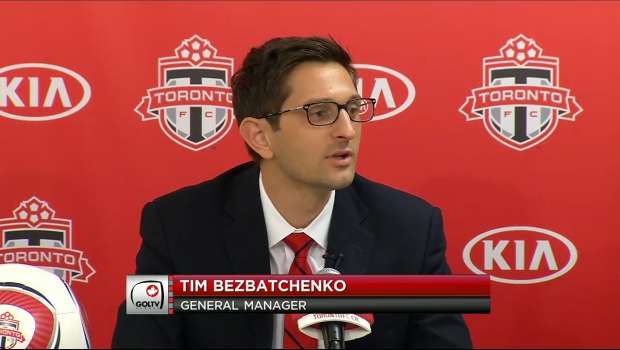 Tim Bezbatchenko may not have experience as a General Manager, but with his new position with Toronto FC, he’s going to hit the pitch running.

Bezbatchenko was named as Toronto FC’s new GM on Friday in a live press announcement by Tim Leiweke, President and CEO of Maple Leafs Sports Entertainment.

Bezbatchenko is coming to Toronto from a position with Major League Soccer in New York where he managed multiple clubs’ budgets and rosters.

“He hasn’t played at the MLS level, but he has at least grown up playing [the game]. He played in the NCAA, he played in the USL — so he understands the game as a player as well. I think that will also be an asset.”

A lot of thought went into the process and Bezbatchenko just made sense for TFC, said Leiweke in Friday’s press announcement.

“We want to be in a position where we do a better job at analyzation than any club in the league,” Leiweke said, “so we looked out and what we began to understand is we had a pretty unique situation with Tim.”

Leiweke went on to say that Bezbatchenko, “understands not only the players, their contracts, the cap position of every team in the league, but he also deals with every General Manager in this league on a daily basis.”

New GM in place, TFC can move forward by having Bezbatchenko go through the club from top to bottom — including support staff — before the season’s end, said Schuller.

“What he needs to do between now and the off-season is not just identify all of the problems, but also what is going right for the team. Defensively they are okay and they have a decent young core. So they need to find ways to improve that and I think that is what will happen once January hits.”

However, words without actions are useless and Bezbatchenko was quick to point this out in the press conference.

“It’s not about promises now, it is about planning, action and results. It is about getting the job done and that is what I am here to do,” said Bezbatchenko.