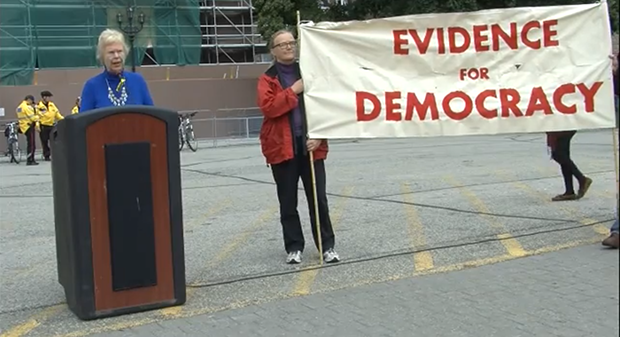 by Lisa Mayor and Rachel Landry

On Monday Sept. 16, rallies across the nation vied for a more scientific and sustainable Canada. One of those 16 rallies was at Queen’s Park in Toronto.

Stand Up for Science is a nationwide series of protests, precipitated by the federal government’s cutbacks in scientific research. One of the principal causes was the decision to abolish the long-form census, and what that means for science and sociology.

Scientists and their supporters came together to encourage policy makers to give science a second chance.

The day was organized by Evidence for Democracy, a group that advocates for the transparent use of science and evidence in government.

Margrit Eichler is the spokesperson for Toronto’s Stand Up for Science, and an emeritus professor of social science at the University of Toronto.

Eichler kicked off the rally with hopes of change.

“We are here to make a point that will not be able to be ignored,” Eichler said. “We are all here to stand up for science.”

“Science is the life blood of our future,” she said. “We need scientists who are able to advise the government when it needs to hear the difficult truth. We are going to make this an election issue, and these rallies across the country are a part of moving in that direction.”

“Stand Up for Science” states that they are calling on the Federal government to fund scientific research on all levels, to use the best available science and evidence to make the best decisions, and to support the open communication of publicly funded science to the public, unless there are demonstrably good reasons for not doing so.”

The rally featured several speakers, and featured a message from the only living Nobel Prize winner in Canada, John Polanyi. His message was read by Jessica Gallinger, executive-at-large for the University of Toronto’s Graduate Students Union.

“Congratulations for having the far-sightedness to stand up for science,” Gallinger read of Polanyi’s message. “For the first time, Canadian science is strong. That is the result of public concern for science… “

“It is also the result of good government, which has in earlier times given scientists the freedom essential for creativity. The concern that brings you here today is that the freedom of science is being constrained… You are right to be concerned… Science is the way of thinking essential to the hopes of our future.”

Allan said science is something the government needs to think about long-term.

“We all live on this earth and we have investments in being here,” Allan said. “We want to see our society be sustainable, we want to live this life and hope future generations can have the same benefits of this world that we have.”

“It seems that the government is supporting science on how they can make money right now – so short-term investments, and I think they need to put more money into long-term investments.”

Alastair Woods, The Canadian Federation of Students’ Ontario chairperson, said he thinks this issue is very important to students.

“There has been a systematic attack at the federal level on scientific research and scientists,” Woods said. “In order to make sure that those facts can’t come out, and that way their policy decisions can’t be criticized.”

“We are the ones who are going to inherit this society, this country, this world afterwards, so the policies which are enacted today… we’re going to feel the effects of that.”
[youtube id=”YQ-OWoJo68c” width=”620″ height=”360″]