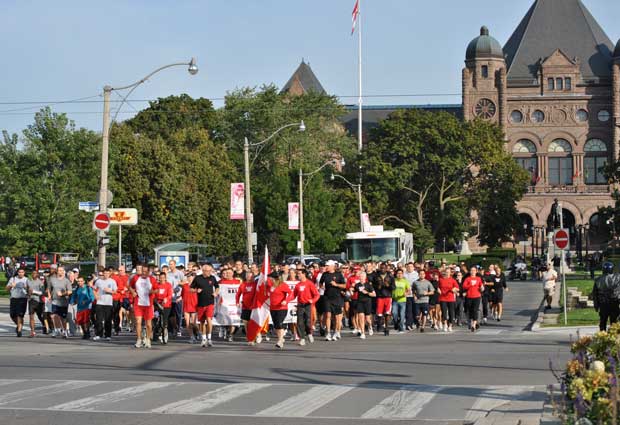 Hundreds of police officers will run from Toronto to Ottawa starting on Thursday to remember fallen officers and raise money for their families.

The National Peace Officers’ Memorial Run to Remember is a 460 km relay where police officers run through many communities. It began Thursday morning at the Ontario Police Memorial site at Queen’s Park in downtown Toronto and  it will end at the National Memorial on Parliament Hill in Ottawa.

The chair of the National Peace Memorial Run, Randy Patrick, said the run is a great way to remember fallen officers.

“We raise money by selling t-shirts, and we donate the funds to the families that have lost their loved one on the job,” said Patrick. “Citizens can participate as well, if they are unable to attend the actual memorial service, running gives them the opportunity to participate.”

After he had a heart attack this past May while nearing the finish of the Toronto Half Marathon, Toronto police officer, Const. Andrew Rosbrook said on Facebook he’s participating in the run for an important cause.

“I am doing this run not only to give thanks to fallen officers and support their families, but also to illustrate and highlight the awesome benefit of AED’s,” said Rosbrook, referring to automatic external defibrillators.

“The crucial role they played in my survival and recovery and my hope that one day they will be as commonplace in our society as fire extinguishers,” he said.

Even though his collapse could have stopped him from participating in this run, he won’t let his heart attack stop him.

“I expect to run somewhere in the region of 80 to 100 kilometres,” said Rosbrook. “As an avid and experienced competitive runner, it would have been unimaginable for me not to run.”