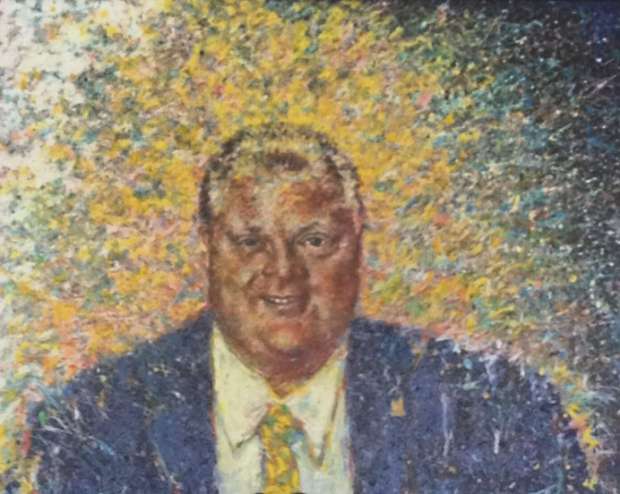 In a ceremony this morning at Toronto City Hall, councillor and artist Gary Crawford of Ward 36, Scarborough Southwest, unveiled his commissioned painting of Mayor Rob Ford.

The portrait, a pointillist rendering of the politician in bright pinks, yellows, and blues, was commissioned by Ford’s mother, who plans to hang it above the mantle in her family room.

“I wanted to capture the image of what Rob Ford represents,” said Crawford, “very colourful, very vibrant, complicated, tense, constant activity. Trying to create the essence of the man, and who the man represents.”

The councillor had been working on the portrait for three years, periodically sharing tweets of his progress with followers.

During the unveiling, Crawford showed a video montage of his tweets set to music, demonstrating his incremental progress on the work.

The mayor lauded Crawford for his work in the arts and said that while the portrait was otherwise accurate, his painting had more hair.

After the ceremony, the mayor declined to comment on allegations concerning City Hall senior aide David Price. Price is currently being investiged by Metrolinx for allegations of abusive behaviour towards transit employees. Mayor Ford hired Price in April and the alleged incidents occurred in late 2012.