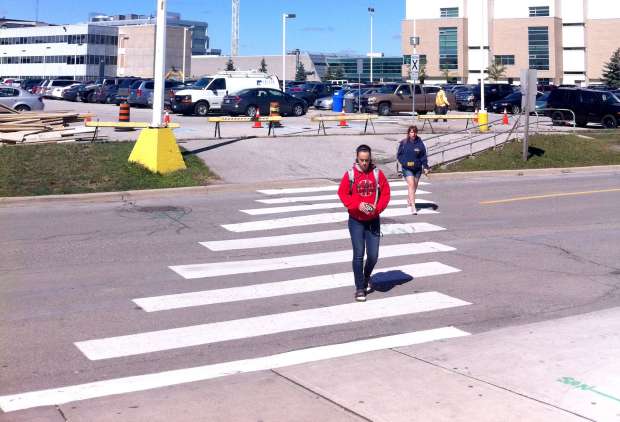 Humber Students are urged to cross with caution and avoid jaywalking. (Photo by Raúl A. Pinto)

A 22-year-old pedestrian was struck by a car at Steeles Avenue and Bathurst Sreet at 1:29 a.m. this morning.

Const. Clinton Stibbe told Humber News that the man, whose name has not been released yet, is “in critical condition.” Stibbe also said the incident was “50 metres west to the major intersection.”

Robert Kilfoyle, director of Public Safety and Emergency Management at Humber, said that jaywalking is not a high infraction or criminal offense, but should be taken seriously by pedestrians.

“Only police have the authority to address jaywalking and give tickets. So obviously, we’d like students to be mindful about the surrounding, cross roads and crosswalks and using the traffic signals,” said Kilfoyle.

He also said the use of headphones, or text messaging while walking makes the pedestrians less aware of what is happening around them.

“We haven’t had any incident on campus that I’m aware of, but even myself, when driving into the campus every day, I see students –well not just students- walking across the roadways and stuff at non designated locations, and often not paying attention, face buried in their phones or reading.”

Both Stibbe and Kilfoyle advise pedestrians to wear bright clothing at night.

“People should be wearing reflective clothes, or they won’t be visible until the car is really close,” said Kilfoyle.

Stibbe said, “obviously, if you’re crossing 50 metres away from where you should being crossing, you need to be completely visible.”