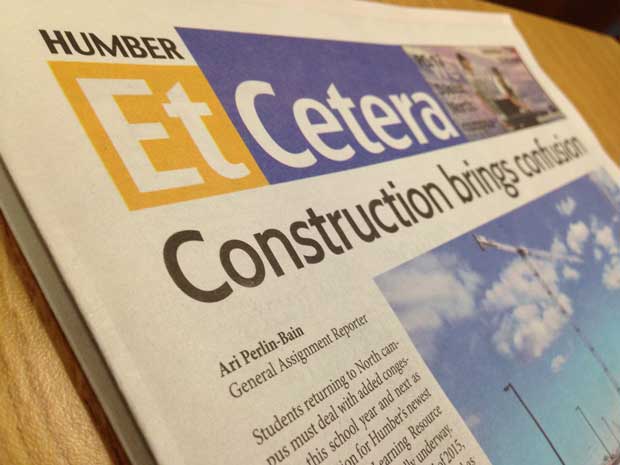 Heather VanAndel, 21, one of the winners of the CSPA award, won for her role as Art Director and for her work for Convergence Spring 2013.

Humber Journalism’s trophy case is getting a little crowded.

This year, six Humber students have won the 2013 Collegiate Gold Circle Award for their exemplary contributions to Humber Et Cetera, the weekly newspaper created by Humber’s journalism program. This award is presented annually by The Columbia Scholastic Press Association.

The CSPA, which was founded in 1925, is an international student press association that unites journalism students and their faculty advisers from across Canada and the U.S.

She said her nomination came as a surprise, as it did to all the other winners.

“I feel really surprised and really pleased,” said Wilson. “I’m looking forward to having that certificate but it’s also really nice to be acknowledged. That was my first piece I ever wrote for the Et Cetera, and I’m pretty proud of it.”

Wilson worked as a student reporter for Et Cetera during the Winter 2013 semester. She said the newspaper’s fast pace was something she wasn’t accustomed to.

“It was crazy at first,” said Wilson. “We had to turn in a story every week and that pace was something I had never experienced before. You had to be coming up with ideas constantly and getting your stories in on deadline.  Near the end of the year.. by the time my last story came around, I felt like I finally got the hang of it.

Heather VanAndel, 21, a recent graduate of the journalism program, won for her contributions to the newspaper as the art director and her design on the spring 2013 issue of Convergence Magazine.

VanAndel said creating a successful newspaper is a team effort, for both the student reporters and the executive team.

“There are so many things that make a great newspaper stand out, design are only one aspect of that,” said VanAndel. “I think that as a team you have to build stories up from scratch and come up with a headline that grabs people’s attention. Photography is also very important, I think no matter what the design is of the newspaper, the main photo will always catch the reader’s attention, and that’s the most important part.

Neither winner is taking the news lying down. Wilson is a full-time intern at Canadian Living, and VanAndel works full time with Sun Media on their layout and design team.

Other Humber winners were Russell Piffer, for his piece titled, ‘Glorious single life not perfect,’ Shazia Islam for her editorial piece, ‘Unfair racial disparities in youth prisons,’ Doreen Dawang for her design format in the April 12, 2013 issue of the Et Cetera, and Julia Alexander for her story, ‘Student’s family afraid in Egypt,’ and her contributions to design.