Greyson and Loubani start hunger strike for their freedom 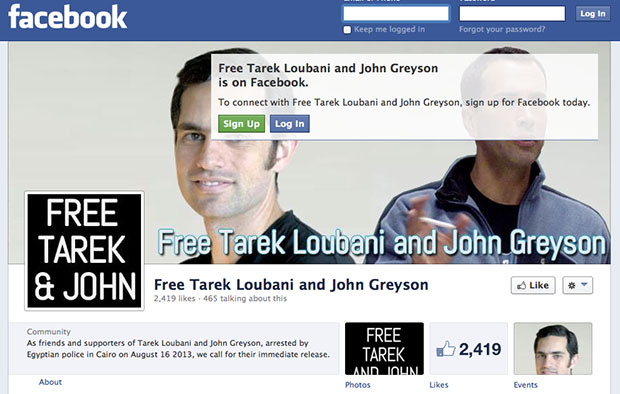 Tarek Loubani and John Greyson have started a hunger strike to draw attention to their imprisonment.  SOURCE: SCREENSHOT

Two Canadians held in an Egyptian prison for over a month have begun a hunger strike today to protest a 15-day extension to their detention.

Film-maker John Greyson and emergency room doctor Tarek Loubani have been detained since Aug. 16 without charges when they walked into a police station to ask for directions, according to a press release on a website created by friends and family.

Loubani and Greyson were travelling through Egypt to the Gaza Strip where Loubani was to begin work on a medical training program at the al-Shifa Hospital. Greyson was traveling with Loubani as a film-maker.

“I did not know they were in jail and I was wondering when they were arriving to Al-Shifa,” Dr. Ayman, a physician at al-Shifa Hospital, told Humber News.

Doctor Nasseer Safar, another colleague at the hospital, has worked with Loubani. “I know he is detained in Egypt now … no, we haven’t heard anything from him … he’s coming to Shifa hospital … I hope he will come back to Gaza and go back to Canada to be with his wife and children,” Safar told Humber News.

The detention of the two Canadians has received widespread international media coverage. After a website was created by family and friends, a petition was started at change.org which at present has garnered over 120,000 signatories. Over 300 prominent cultural and academic figures have submitted letters of support, including political activists Noam Chomsky and Naomi Klein.

A press release issued this morning by John Greyson’s sister, Cecilia Greyson, and friend Justin Podur said “Greyson and Loubani’s detention could be extended up to two years without formal charges being laid, according to new emergency measures put in place in Egypt.”

The press release also said the pair would still be taking liquids, but will refuse solid food in protest of their “arbitrary” detention.

Egyptian prosecutor Hesham Mohamed Zaki Barakat issued the extension to continue his investigation to determine if charges will be laid against the two Canadians.