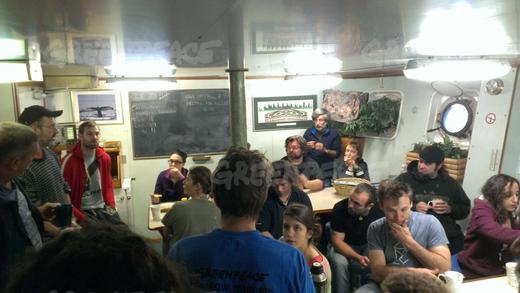 Piracy charges will be filed against the activists held by Russian authorities aboard a Greenpeace ship, according to a spokesperson for the Investigative Committee of the Russian Federation.

Thirty activists have been held aboard the Arctic Sunrise since Sept. 19. Two of the activists are Canadians.

On Sept. 18 two activists from the Arctic Sunrise scaled an oil platform in the Pechora Sea, off the northern coast of Russia. They were detained by members of the Russian navy for about 24 hours before being returned to the ship. Russian authorities then seized the ship.

Paul Ruzycki is one of two Canadian crewmembers on the Arctic Sunrise. His sister, Patti Stirling, told Humber News that the family’s last contact with Paul was shortly before the activists were returned to the ship, five days ago. “Paul had just finished emailing me that all was quiet on board, and that they were hoping for the safe release of the two activists.” Shortly after receiving the email, Stirling says the ship’s twitter feed went dead. “Within an hour I was getting phone calls saying they were being boarded by commandos with rifles and that they were being held hostage by the Russians.”

Farrah Khan, an Arctic campaigner with Greenpeace Canada, confirmed that the Arctic Sunrise was towed to Murmansk on Russia’s north coast on Sept. 24. “They just arrived there early this morning, our time…Greenpeace has a team ready in Murmansk to provide legal assistance.”

A spokesperson for the Investigative Committee of the Russian Federation, Vladimir Markin, issued a statement Sept. 24 saying piracy charges would be filed against the activists.

“Such activities not only infringe on the sovereignty of a state, but might pose a threat to the environmental security of the whole region,” the statement read.

Greenpeace has refused to acknowledge the legitimacy of any piracy charges.

“Our legal team is saying piracy charges would not apply in this situation,” Khan told Humber News.

In an academic paper published by the Social Science Research Network two days ago, Stefan Kirchner of Lapland University’s law faculty in Finland, wrote, “Russia has disregarded several of its international obligations in order to force environmental activists to end peaceful protests.” Russia’s actions were in violations of a number of conventions, Kirchner wrote, including the international Law of the Sea Convention. “In order to comply with international law, Russia has to ensure the speedy release of the vessel and its crew.” Writing to Humber News on Sept. 24 Kirchner said, “I do not consider this to amount to piracy within the meaning of international law.”

Meanwhile, Stirling said the phone line is open for Paul as his family waits to hear of his fate. She received confirmation that the crew aboard Arctic Sunrise was receiving consular support and had been able to speak with Greenpeace support members earlier Sept. 24. She, too, expressed doubt of the piracy charges.

“When you have a vessel full of people that have no weapons, that are boarded illegally and then held captive for five days with no communication with lawyers, family, no contact with the outside world, violent weapons brought onto the boat. I have to ask you: who’s the pirate? The Greenpeace vessel was in international waters when this happened. So if anybody is being charged with piracy it should be the Russian navy. “