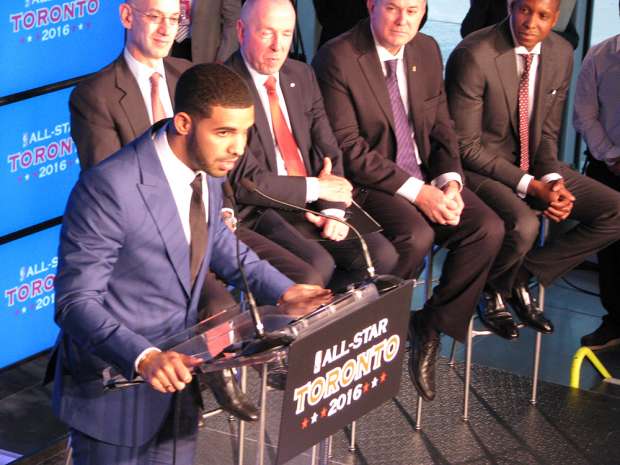 Kicking off their 20th anniversary, the Toronto Raptors and Maple Leaf Sports and Entertainment officially announced that Toronto will be hosting the 2016 NBA All-Star game and introduced Drake as the team’s global ambassador.

“Personally I’m out here with the people, I’m in touch with what they want to see”, said Drake.

“I really just want excitement for this team, I want us to be one of the biggest teams in the league,” he said.

“I’m just excited as now the global ambassador, as a season ticker holder, to bring everything I can, everything in my power to increase the brand and just grow the franchise with these gentlemen.”

NBA Deputy Commissioner Adam Silver said at a press conference at the Air Canada Centre. There will be a week-long festival leading up to the weekend of the All-Star game. It will be organized by the Ontario government, the City of Toronto and MLSE in a way that “touches every member of the community”.

“Many of you do not know that the first ever NBA game was played here in Toronto in 1946, actually against the New York Knicks,” Silver said.

“So it’s only fitting that the first All-Star game ever played outside of the United States would also be played here in Toronto as well.”

MLSE President and CEO Tim Leiweke said the Raptors have a lot to live up to over the next two seasons, and general manager Masai Ujiri said he’s prepared to take on the challenge.

Leiweke said the team has been going through major changes under Ujiri’s leadership, which is why MLSE will be taking the next step to deploy Drake and rebrand the Raptors.
[youtube id=”nJsaRRt9RGA” width=”620″ height=”360″]

Humber College has hosted the Raptors Basketball Academy for over eight years, where close to 200 kids come to the North Campus Athletic Centre for a week to play and interact with Raptors and coaches to improve their game.

James DePoe, Humber Athletics events and program coordinator and men’s elite high-performance team manager for Canada Basketball, said it is a good move to use Drake to promote positive change for the Raptors brand.

“It’s a no-brainer, you have a multi-platinum, international star from Toronto who is well traveled, educated, a smart businessman who’s branded himself well,” said DePoe.

Using Drake for “rebranding Canada’s team for the All-Star game, that’s seen in many countries around the world, is a fantastic strategy. He loves to utilize his pride and show he’s a regular guy, a regular fan,” said DePoe.

The Raptors begin their season on Oct. 30 against the Boston Celtics.