BlackBerry eyed by investors amid talk of layoffs 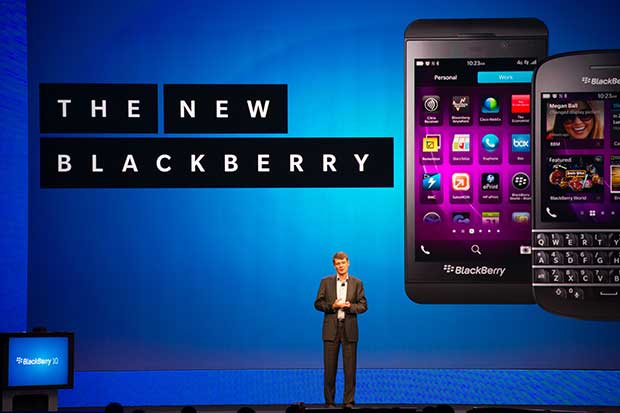 BlackBerry CEO Thorsten Heins shows off BlackBerry 10 at a launch event on Jan. 13, 2013. BB10 was supposed to be the catalyst for change within the company, according to analysts.
(Image courtesy of BlackBerry)

BlackBerry investors may want to think carefully before selling their shares in the company despite layoff rumours, investment experts said Thursday.

The Waterloo-based tech giant BlackBerry is preparing to lay off up to 40 per-cent of its workforce according to a Wall Street Journal report first posted on Wednesday.

“Unless you just find the uncertainty too difficult to deal with, there would be no particular reason to be selling it at this stage,” said Eric Kirzner, investment and stock market professor at University of Toronto’s Rotman School of Management. “In fact, who knows, maybe we have hit the bottom on this thing.”

BlackBerry is increasingly in a world of uncertainty and has been for quite some time, said Kirzner.

Despite the gathering clouds of uncertainty, Waterloo’s tech titan seems to be taking steps to weather the storm.

In addition to the reported layoffs, BlackBerry announced Wednesday that their popular BlackBerry Messenger (BBM) platform is coming to both Android and iPhone this weekend.

“The fact is capitalism and the free market is cruel,” said Gary Ng, Editor in Chief of iPhoneInCanada.ca, who watches the mobile market closely. “As much as I hope the company will do well — and it is a great Canadian company — the bottom line is your products need to speak for themselves and clearly customers are not buying the BB10 smartphones in numbers (the company likes).”

BlackBerry releasing BBM to other platforms could be viewed as a desperate attempt to gain users as Wall Street and business analysts worry about the low sales, Ng said.

“The company is trying to make itself look attractive to prospective buyers.”

Between layoff rumors, talk of selling the company and releasing BBM to other platforms, investors have the same information as everyone else and have to make a decision based on risk, said Kirzner.

“The share price today already reflects all of this news,” said Kirzner. “So unless you have some special ability to interpret this news differently than everyone else, you have to assume that today’s price is the best estimate of what the company is worth.”

“For many investors, this may be just too risky of a proposition for them.”