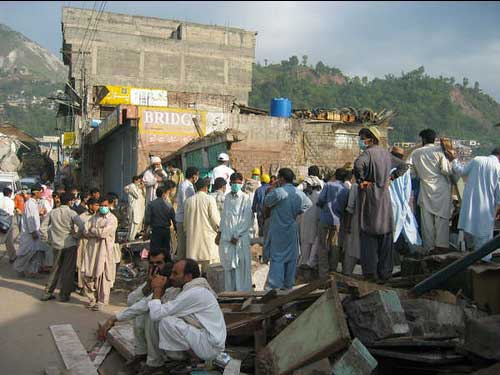 At least 50 people are reported dead after a 7.7 magnitude earthquake struck the southern region of Pakistan Tuesday morning.

The quake struck 100 km southwest of the city of Khuzdar in the Baluchistan province at 4:29 p.m. local time.

It was described as a shallow type of earthquake that’s closer to the earths surface.  It has the potential to be quite devastating said John Bellini, a geophysicist for United States Geological Survey (USGS).

“Shallow earthquakes cause far greater damage than deeper ones. This earthquake was about 12 miles (20 KM) deep which is relatively shallow for an earthquake of this size,” said Bellini.

“This could certainly cause significant devastation in the vicinity.”

Even with the best equipment, funding and tracking team, there is no way to predict or fully prepare for an earthquake, Bellini said.

“There is no warning and you can’t predict an earthquake.  Everything happens after they occur.”

Although earthquakes are unpredictable, there is a way to be prepared said Stephen Holchuck, a seismologist with Natural Resources Canada.

“In Canada, all structures are required to meet the requirements of the national building code of Canada.  In [the code] there are provisions for withstanding certain levels of shaking from quakes,” said Holchuck.

“We can’t tell them when one will occur, but we can give them a general sense of where they could occur in the future which they then build according to that level.”

Many countries don’t have the resources to prevent earthquake disasters said Holchuck.

“Not all countries have building codes, materials or engineers that we have here,” Holchuck said.

Toronto’s neighbouring Arab community will be rallying any support they can said Zafar Ali Qureshi, President of the Ontario Association of Pakistani Canadians.

“When the 2005 Kashmir mountain earthquake hit we had a lot of people collecting support money, supplies, finding hospitals, doctors and nurses,” said Qureshi.

“I hope that we can help out and do everything we can.”