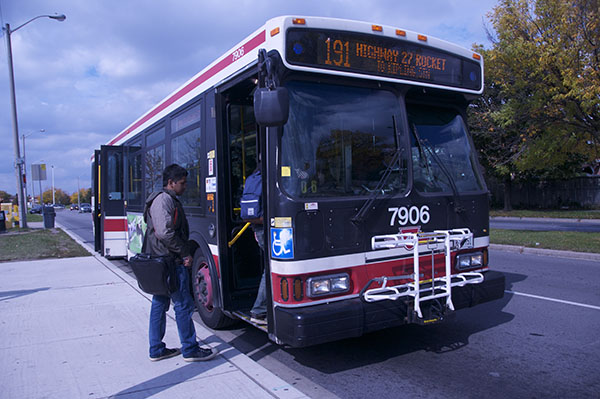 Led by Mayor Rob Ford, Toronto city council held an executive committee meeting on Tuesday that looked into raising an additional $2 billion to expand transit across the GTA.

Possible ways of raising money include road tolls, fare hikes, and even a return of paying a vehicle registration tax.

The Canadian Automobile Association South Central Ontario is urging the province to take a leadership role in funding consultation instead of the city of Toronto.

“This is a regional issue, so we need to consult with all the municipalities in the region because there are four million people in the Greater Toronto Area and there are 2 million in the city of Toronto,” Faye Lyons, a government relations expert with CAA in Toronto, told Humber News.

“CAA feels there are 4 million Greater Toronto residents who need to have a voice as those people are also travelling in and out of the city,” said Lyons.

“We need to make sure they have a voice in this issue,” said Lyons.

The CAA says packed roads a huge headache across the GTA and into Hamilton.

“The growing problem of traffic congestion and the need for an
integrated transit system extends well beyond the boundaries of Toronto. The
issues sprawl into the 905 region to the north, east and west and affect 4 million” people.l

TTC chair Karen Stintz said while she supports the GTA and the province working together, she stresses: “We cannot rely on the province to fund our transit need,”  National Post reporter Natalie Alcoba tweeted on Tuesday.

A poll that came out in the Globe and Mail on Tuesday found that 34 per cent of people are against paying extra fees or taxes while 28 per cent are for it.

“What [the poll] shows is that this is actually quite a divisive issue,” said Nik Nanos, president of Nanos Research, in a Globe and Mail interview. “I’m not sure if there’s really a political win when you wade into something like this because even when you look at the different regions, most of the regions are split.”

The poll also reported 27.1 per cent of people would choose road tolls to be their first choice of tax collection. A gasoline tax placed second, with 15.8 per cent support. A transit fare hike came in third at 12.1 per cent.